Home > How to Play Rummy

How to Play Rummy

How to Play Rummy - A Complete Detailed Guide of Rummy Games

Rummy is a skill-based game that is played by two to six players, using one or two decks of standard card decks (including jokers). Each player is dealt with 13 cards, which he has to arrange into valid sequences and sets. There are two card decks, closed and open, from which each player draws or discards the cards. The player who forms proper combination sequences and sets, and makes a valid declaration first wins the game. While the Kings, Queens, Jacks, and Aces are worth 10 points each, the numbered cards are worth their face value. The winner gets zero points, while other players are marked according to the cards in hand.

What is a Rummy Card Game Objective?

If you ever wonder how to play a rummy game, here are simple Indian rummy rules to aid you.

What is a Sequence in the game of Rummy?

A sequence is a group of cards that has three or more consecutive cards of the same suit. There are two types of sequences: pure and impure sequences.

Following are a few examples of a pure sequence:

An impure sequence is a group of three or more consecutive cards of the same suit, with one or more joker cards.

Following are a few examples of an impure sequence:

What is a Set?

A set is a combination of three or more cards of the same rank, but of different suits. A valid set cannot have more than one card of the same suit. To make a set, you can use one or more wild or printed jokers. 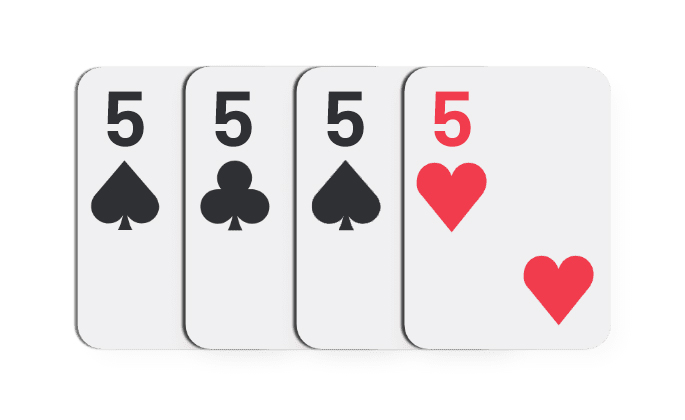 The above set is invalid because it consists of two 5♠️. It would have been a valid set if there were 5♦️ instead of one 5♠️.

Significance of Jokers in Rummy

Jokers play a pivotal role in the game of rummy. There are two kinds of jokers used in rummy.

This card has a joker printed on it and can be used to form an impure sequence or a set.

A wild joker is picked randomly at the beginning of a game. The wild joker can also be used to form an impure sequence or a set.

Valid Declarations according to the Rummy Game Rules

To win a game of rummy, you must arrange all the 13 cards in sequences, or combinations of sequences and sets. Once you are done with melding your cards, you need to declare your hand. The player to make the first valid declaration is the winner and scores zero.

A rummy player must fulfill the following three conditions to make a valid declaration:

At least one pure sequence is required to win a game of rummy. A pure sequence consists of three or more consecutive cards of the same suit, with no printed or wild card joker. If you declare without a pure sequence, it will be an invalid one.

All the Cards should be Melded

Example of a Valid Declaration:

The declaration above is invalid because it does not have a pure sequence and not all cards in it have been melded.

For a valid declaration, at least two sequences are compulsory. In the above example, there is only one sequence, and hence the declaration is invalid.

Winning Tips and Tricks to Win a Rummy Game

Rummy is a game of skills and requires a lot of practice. Along with knowing how to play Indian rummy, rummy terms, and rummy rules, you must also use some tricks to outsmart your opponents.

Pure Sequence should be your Prioritye

As soon as the cards are dealt, focus on forming a pure sequence first. Without pure sequence, you can’t win a game of rummy.

Discard high-value cards at the earliest

The high-value cards increase the chances of you losing by a big margin. Only if you are sure of forming a sequence or a set with high-value cards quickly, keep them; otherwise, discard them as soon as possible.

Wait for the Connecting Cards

Keep a Close Eye on your Oppositions' Moves

Observing your opponents’ moves is a key factor if you want to stand a chance to win a rummy game. Suppose your opponent picks up 5♦️ discarded by you, then do not discard 3♦️,4♦️,6♦️,7♦️, or 5 of any other suits.

Use jokers smartly to form sets or impure sequences. Jokers play a vital role in the game of rummy.

Scoring System in the Game of Rummy

Now, let us consider that 4 players are playing the game. Player 4 has won the game. Following is the point calculation for the game.

In rummy, players losing the game are penalized with some points. Following are how the penalty points are awarded.

Wrong Declaration: A wrong declaration will cost you 80 points, irrespective of the cards in hand. So, it is advised to double-check before going for a declaration.

First Drop: If you decide to quit the game as your first move and without picking a card, it will be considered as a first drop and you will be penalized with 20 points.

Middle Drop: If you decide to quit the game any time after your first move, you will be penalized with 40 points.

Consecutive Misses: Three consecutive misses will count as a middle drop and you will be penalized with 40 points.

Leaving the Table: Leaving a table midway will count as a middle drop and you will be penalized with 40 points.

The feeling of winning a rummy game online is unmatched, isn’t it? But do you know how the points are calculated in cash rummy games on First Games powered by Paytm? Following simple formulas are used to determine the prize amount.

Winnings = Sum of the points of all the losing players x Value of each point in rupees – First Games fee.

Suppose two players are playing a Deals rummy game with an entry fee of Rs.5. The winning will be calculated as, (5x2) = Rs. 10 – First Games fee

Following are a few important rummy terms that will act as a rummy guide and help to polish your rummy basics.

In online rummy, 2 to 6 players play on a virtual table.

The sorting of cards is mostly done at the beginning of a game. You can press the “Sort” button and your cards will be arranged properly. This will help you form pure sequences, impure sequences, and sets. Once your cards are sorted, you can quickly decide whether the drawn card needs to be kept or discarded.

A round or a deal begins when the cards are dealt and ends when a rummy player makes a valid declaration.

Dealing means the distribution of cards at the start of every round.

Drawing means picking a card from either a closed deck (cards placed face down) or an open deck (cards discarded by players and placed face up). Once you pick a card, you also need to get rid of one of your cards. This process is known as discarding.

Once rummy players have been dealt with cards, they have to arrange them in sequences, or sequences and sets. This process of arranging cards in valid combinations is known as melding.

Jokers play a crucial role in the game of rummy. There are printed jokers (one per deck) and wild jokers (4 per deck). Both types of jokers can be used to complete impure sequences and sets. A wild joker is selected randomly at the beginning of the game. All the same value cards in the other suits also become wild jokers.

Chips are used to play practice games. Some chips will be credited to your account upon registering on First Games.

Once you have melded your cards according to the rummy rules, you need to show the cards to your opponents. This act is called declaring your hands.

Cash tournaments are where you can earn real money by using your rummy skills. There is a certain entry fee that you need to pay before joining a cash tournament. On First Games powered by Paytm, you can join exciting cash tournaments and win big. Now that you have understood 13 card rummy rules, how many cards in rummy, how to play cards games, and tips and tricks to play online rummy, try your hands at the enthralling rummy game on India’s most trusted First Games app powered by Paytm.